I didn’t have anything particular on the I want to do Now list so I pulled a number from the bowl and started a new top last week.  Out of 49 numbers in the bowl what is the chance I would pull out number 1 the first time I use the bowl?  Pretty good I guess since that’s what I pulled.  Turns out it was another 4 patch posey.  Normally I would put it back because I just made one but the rule is, whatever number comes out is the one I’ll be making.

It’s a fabric I just kind of bought on a whim and wondered how it would look as a 4 patch posey.  I ended up laying it aside as I thought it was really too busy but it actually turned out very nice.  My original idea was to make the posey then sash the blocks using the coordinating stripe.  Once I saw how the blocks came out the strips just washed it all out so I decided to use black with a small cornerstone in the stripe.  I’ll use the rest for binding so it’s not wasted.    This is one of those quilts that you love it or immediately think it’s too loud.  I personally love it.  It isn’t quilted yet and I normally only share completed pictures so I will only share the beginning row.   The fabric is called Brooke Fabric by Studio 8.   It will have 8 rows and I don’t think I even have 2 identical blocks.   I was really surprised how this look finished.  Nothing like I expected.

Want a laugh?  I pulled the 2nd number out of the bowl so I’d have something to play with evenings I’m not cleaning.  I pulled number 2.  That has to be like 1 in a million odds.   But, at least it wasn’t a 4 patch posey and it’s actually Christmas fabrics.  Perfect timing.  I’ll give you a hint of that one once I made some of the blocks. 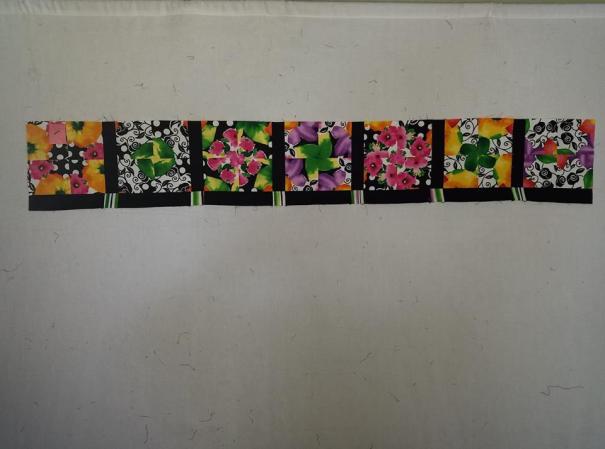