Last night I was reading on article on public shaming and how it’s become a cyber thing and mostly abused in our society but not sure I agree.   If we knew the way we acted, treated other people and so forth would be seen or talked about in public would we behave the way we do?  The article talked about reporters making racial comments, dentist killing lions (we’ve all heard that one) and even people that posted on facebook about something a friend did, cheated on a spouse, stole something, etc. and wondered if public shaming was too harsh especially in the social media.

Define too harsh.  Isn’t your social media your page to add or not add what you like? Regardless of that, stop and ask yourself of things you’ve done lately.  Would you have said that, acted that way or done that if you knew people would hear about it?  Do you act one way in front of people then get nasty if your real behavior becomes public knowledge.  Do you lie about situations so the other guy looks like the bad guy and hope the truth isn’t posted somewhere public?  Do you pray over every meal yet forget to pray over the way you treat people.?

If you look back at the original idea of public shaming I think it served a purpose.  There was no small claims court and such where you took people that cheated you, lied about you, etc.   When those people got caught their behavior was public and I’m just guessing, but I think they learned a valuable lesson in life.   I know I have done things in the past had I known I’d be shamed in public I would have seriously rethought the idea.

I look at a current situation I’m dealing with and think public shaming would be a fair result as I don’t believe in suing people.  I’ve helped two people I thought were friends financially for thousands of dollars over the past year and half, paying lawyers, child support, taxes, car repairs, credit cards, etc.  I put a roof over their heads and food in their mouths for months because they didn’t keep their end of the agreement to pay their share.  Once I said paying their share left me in a financial bind and we had to look at other living options those same people said they needed to distance themselves from me, I made them uncomfortable and had ripped apart the friendship (because I have no more money?).  They have remained in my home for the last 20+ days with me still paying all the bills and one walks past me without speaking and won’t so much as take out a trash bag.  The other won’t sit in the same room as I am, has returned Christmas gifts by laying them on a table and both suddenly they have money to eat out most nights, rent a new house and spend weeks redoing it, etc.   I ask myself what lies they told the next person that stepped out and helped them and how long before they ruin that relationship by abusing their kindness.  I can’t stop the behavior because watching the change in their actions and attitudes the past 3 weeks and looking back at comments and behavior, I realize this is a lifestyle for them.  I am sure I am not the first to be taken advantage of and dumped when the money ran out but I wonder . . . . if they knew what they did, how they acted or treated people would be posted for the public on facebook, twitter, friends pages, etc. would it make them think before they did it again?  So maybe public shaming should be brought back.   Just my humble opinion but this is my blog and that’s what I add here, my opinion.

Rather than sew on a dining room table these are just some ideas I like for making a nice sewing room.   I like that I might be able to do the cutting table myself as I can use my existing table and some cubbies.  I hate having to ask people to help me all the time but I am not mechanically or building adept. 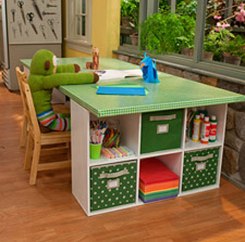 You know it’s very rare in life we get along with all your family and ever rarer when you find friends that touch your life just family.  What amazes me is how people can act like friends, say you’re like family to them then you discover you were nothing but a source of revenue.  I ask myself all the time how people use and take advantage of others and sleep at night?  What troubles me is how easily people do it.  Especially so called Christians.

I would never judge anyone’s walk with God as mine is not perfect and never will be. But I wonder, how do you pray over every meal, claim you pray over every decision, study your bible daily, read you devotionals then use people, manipulate them, take advantage of their giving hearts and act like a complete ass when they cut off the money?  Did you pray over the decision to toss them out of your life when the money ended?   Did you seek God’s guidance on how to take advantage of them, run up bills you can’t pay and leave them responsible for paying them?  Doesn’t God lay some unease on your heart when once the gravy train is gone you can suddenly afford to rent a house, eat out nightly, etc?    Once you take a step back from these types of people and start thinking about the comments they have made and others have made about them, you begin to realize what a complete fool you were.  You start to see they have not only lived their lives behaving this way but they have taught their children the same lifestyle.  I guess the old adage the apple doesn’t fall far from the tree, is true.

How do you move into someone’s home agreeing to split expenses, live there 5 months and pay almost nothing claiming you just have no money when the bills come in then be hurt when they say they can’t afford to pay your share anymore?  How do you turn that around and blame that person, tell them you need to separate yourself from them, they ripped apart your friendship, etc. because they couldn’t pay your share anymore and you left them in debt?

I want to not be bitter, not wish bad things on them as that’s not how God tells us to live but you have to work hard at that. My mind says call the next person they conned and tell them what they’ve done but I guess that’s none of my business.   It’s one more relationship they will ruin and blame the one helping them.  I guess you have to accept an apology that was never given.   The good thing is it brings out the people that really are your family to support you.

The last couple of years I’ve donated quilts to different groups to raise funds for someone struggling with large medical bills, expenses, etc.  I realized this year, why can’t I do that myself?  So I picked a family I know is having a lot of medical bills and I made this quilt to raffle.  So far we’ve sold 87 tickets and they are available until April 5.  I’ll post the finished quilt once it’s quilted and bound and the name of the winner here on April 6.  It is much prettier in person.